skip to main | skip to sidebar

Prepare yourself. you are going to want to move in

Here they are, the pics of our new basement. 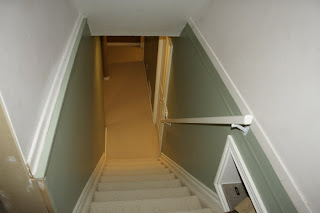 Above is the stairs heading into the glorious new space. On the left there you can see a tiny bit of wall that still needs some work. That is up to us. It was a add on that we never had in the contract but Phillip covered up some really bad drywall there and we just have to paint it. The entrance to my scrapbooking room. It is really cluttered because the counter top is late. The laminate that he had ordered was cracked when he went to pick it up. So, this room is not complete but I have really needed to use it for some Christmas projects that I have been working on. The stuff on the left is going. The table end to the right of the closet is going and of course that table will be gone. I plan to have a fold out underneath that window for company. 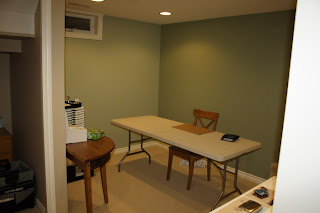 My temporary workspace until the counter top comes in. Hopefully tomorrow but we are heading south for a few days so I won't really get to enjoy it. Besides I am done my stuff for now. 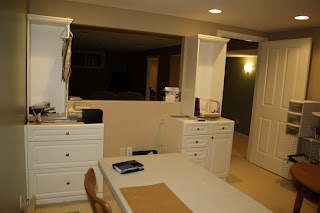 My storage space and wall cut out. I can watch Simon on the computer through there. that little bit of light you see on the right there through the cut out is Simon's office. I will send out the fished pic when that is done and organized. 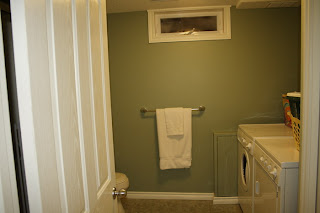 The entrance to the laundry/bath room. 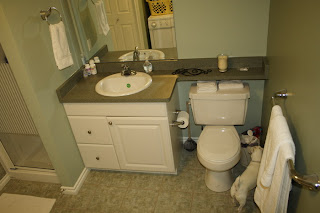 That is Simon's little showering space and the rest of the bathroom Oh, and Jango sniffing the garbage. I think he is after my empty coffee cup. He likes lattes too. 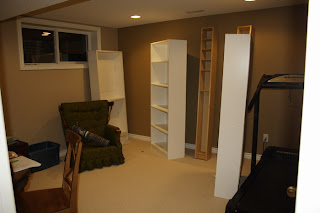 This is the start of Simon's office. Everything has been just kind of "placed" in there for now. We are still planning what it is going to look like. We are also going to be putting some bunk beds in there for guests. 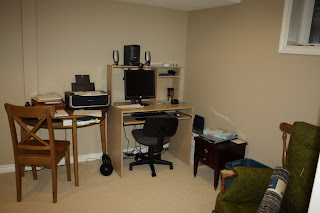 That is where I am sitting now. We are hoping to find a desk that will fit all of our stuff on it soon. 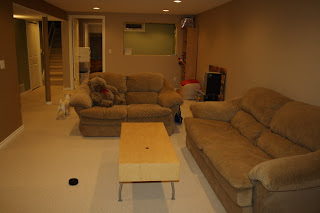 The media area. There is a couch behind and to the right of me and the TV is to the left. That little black mark on the coffee table is from a t-light I left burning on there years ago. We plan to cover that table in tiles. It has been around longer than I have. 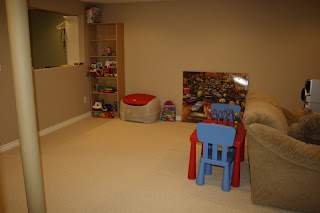 Then the kids play area.

there is still a lot we have to do before it is complete. As far as filling it with all of the stuff still in the garage and getting functional pieces of furniture. It is a cozy little place for us now. unfortunately we have been too darn busy to enjoy it yet. It is a bit bigger than it is coming through here and the new windows bring in so much light. I sure do like it down here now. You wouldn't get me down here after dark before.
So, when are you going to come and see it for yourself??? I can't wait to have my first basement guests.
Posted by Amy at Thursday, December 20, 2007

What a wonderful and inviting space you guys have created.

It starts making our little house feel like a cracker box.

Those bookshelves in Si's office are begging for books, and I'm sure there are plenty waiting to fill them.

Congratulations, you guys. You've managed to make your house fit your needs now, and probably for years to come.

The past week or so I've been walking around the house blurting, "I love having a basement!" totally at random. It's awesome!

Yes, Mark, there are plenty o' books still in boxes in the garage waiting to fill those shelves. Now we just have to get on a serious de-clutter bender when we get back from holidays here...

It looks fantastic!!!! And I'm totally jealous too. In our last house, I waited for 5 years to put in a simple bathroom in the basement (everything was already plumbed in!!), and it never got done. I just talked to the new owners and they've put one in in the first 6 months. Oh well, I guess we did renovate every other square inch of that house, so they had nothing else to work on. I hope you enjoy the basement. I love basements.

"I waited for 5 years to put in a simple bathroom in the basement..." and when I say that, I mean, waited for MARC to do it. :)

It's awesome, guys. The colors are cozy and I totally call top bunk when I show up unexpectedly with another threatening letter.

So does Simon have to shower downstairs or does he just opt for his own little space? I ask only becasue I, myself, shower in our basement bathroom...and it's no where near as nice as yours.

Mark- I thought your house looked roomy when I saw pictures of it...
Dixie- We were actually planning to do it ourselves but after being here for four years and we hadn't even really looked at doing it, we called a contractor.
Moksha-Simon doesn't have to shower downstairs, he wants to. Wouldn't you??? It is an easy solution to his 5:30 am workouts. He goes downstairs for a work out and then he showers downstairs. AND he doesn't wake up the rest of the house. I mean really who gets up at 5:30 to workout.

GREAT colours. Very cozy indeed. Looks like something out of HGTV.

I really like the positioning of the kids' play area, and I just LOVE white cabinets like those in your scrapbooking room (one regret I have from when we did our kitchen).

We have a shower downstairs but we don't shower there... Frank's grandma, when she visited the house when it was new, told me I should get Frank used to showering downstairs right away (you know, so as to keep the "nice" shower upstairs clean). I thought it was cute how she told me that and I didn't reply anything at the time, but I prefer the mentality of using my "nice" shower to shower... live life, you know? ;) Plus, one less shower to clean regularly.

But I admit the workout gives purpose to using the shower there for Simon. I'm afraid if I sent Frank downstairs (where his computer is) to shower in the morning, though, he'd just glue himself to his screen and forget to come up. :|

Congrats on the wonderful reno (the new square footage is great, isn't it? we finally sold the soccer table and got rid of an ugly chair downstairs, so we have some new sq feet of our own for Xavier's playroom).
And Happy Holidays you guys!

Amy, I'd totally babysit - I'm just sayin'. The basement looks AMAZING!! You guys must be so thrilled to have all that SPACE (seriously it looks like a whole other house down there...). Congratulations on having it all done, and before Christmas even!

ohhh Im sooo loving it!!!! I think while you guys are gone Ill just have to go check it out myself and see how homey it can be!! ;)

Wow, that came out beautiful!!! 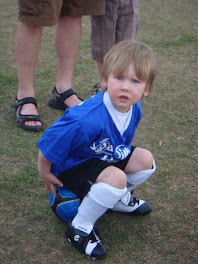 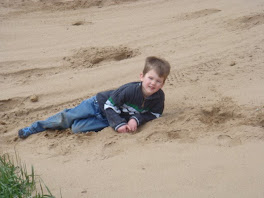